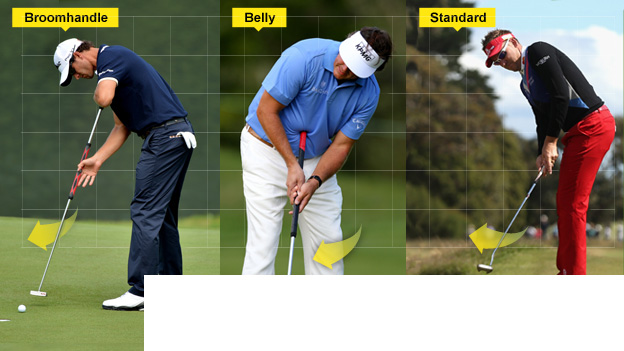 Anchoring of putters banned from 2016 by golf’s ruling bodies
Golf’s two ruling bodies will ban the anchoring of putters in competition from 1 January, 2016.
The R&A and the US Golf Association first unveiled plans last year which were supported by the European Tour but not the PGA Tour.
The ban will apply to any club rested against a part of the body, such as the broom-handle or the belly putters.
Four of the last six major winners have used anchor putters, most recently Adam Scott at this year’s Masters in April.
Rule 14-1b
In making a stroke, the player must not anchor the club, either “directly” or by use of an “anchor point.”

Note 2: An “anchor point” exists when the player intentionally holds a forearm in contact with any part of his body to establish a gripping hand as a stable point around which the other hand may swing the club.

Rule 14-1b, which was proposed on 28 November, has now been given final approval by the R&A and the USGA following an extensive review by both organisations, and prohibits anchoring the club in making a stroke.
A 90-day consultation process was allocated for consideration of comments and suggestions. The USGA dealt with approximately 2,200 individual responses, and around 450 comments from 17 countries were received by the R&A.
The PGA Tour, who said in February there was “no overriding reason” to ban putter anchoring, said they would have discussions with their Player Advisory Council and Policy Board members over the next month.
“We will now begin our process to ascertain whether the various provisions of Rule 14-1b will be implemented in our competitions and, if so, examine the process for implementation,” a PGA Tour statement said.
“We will announce our position regarding the application of Rule 14-1b to our competitions upon conclusion of our process and we will have no further comment on the matter until that time.”
But Tour player Sergio Garcia insisted the PGA should accept the verdict and told BBC Sport: “If the decision is made I think everyone should follow it. You can’t have everywhere banning it and then one tour doesn’t.
“There are already too many things going on so I think we should all go with it, I’m sure the guys affected by it will figure a way.”
Analysis

Research by the R&A and USGA has been exhaustive as they have sought to bolster their argument that the method should be outlawed.

Now it is imperative the rules are adopted by the PGA Tour and PGA of America who have been critical of the move. If they were to defy the rule-makers golf would suffer as the implications for the running of the game are potentially very serious.

Peter Dawson, chief executive of the R&A, said: “We recognise this has been a divisive issue but, after thorough consideration, we remain convinced this is the right decision for golf.
“We took a great deal of time to consider this issue and received a variety of contributions from individuals and organisations at all levels of the game.
“The report gives a comprehensive account of the reasons for taking the decision to adopt the new rule and addresses the concerns that have been raised.”
The R&A, the separate rules body which grew out of the Royal and Ancient club of St Andrews, is responsible for the administration of the rules of golf worldwide, with the exception of the United States, which is governed by the USGA.
The USGA president Glen Nager said: “The new rule upholds the essential nature of the traditional method of stroke and eliminates the possible advantage that anchoring provides, ensuring that players of all skill levels face the same challenge inherent in the game of golf.”
David Rickman, executive director of rules and equipment standards at the R&A, added: “This rule change addresses the future and not the past.
Play media

Anchoring of putters banned from 2016
“Everyone who has used an anchored stroke in the past, or who does so between now and 1 January 2016, will have played entirely within the rules and their achievements will in no way be diminished.”
World number one Tiger Woods said: “I just believe the art of putting is swinging the club and controlling nerves.
“Having it as a fixed point … is something that’s not in the traditions of the game. We swing all other 13 clubs. I think the putter should be the same.”
Legendary South African Gary Player, winner of nine major titles, welcomed the news and said: “The long putter allows you to hide your nerves and nerves are an integral part of the game of golf.”